Oscar fish keepers will often become overly attached to their fish, which is only natural considering that the Oscar can live up to 20 years or even more. This means that they will soon become family members and, whenever they encounter a health issue, they will make their keepers concerned. 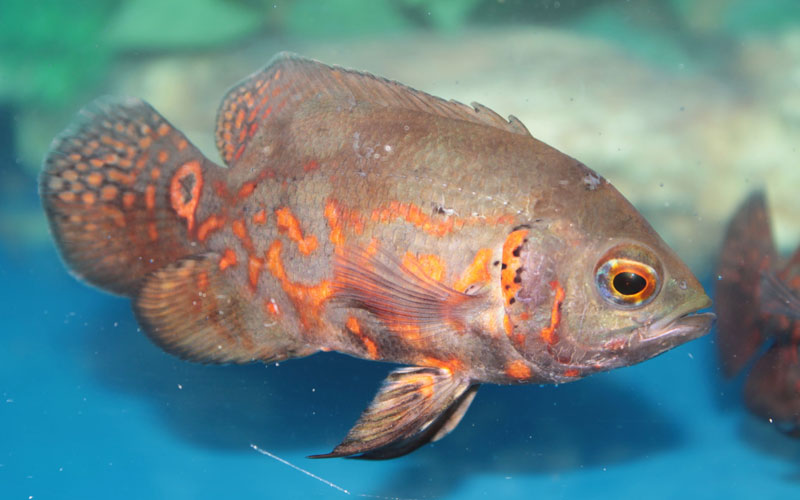 One of these reasons for concern involves scale shedding. It’s not uncommon for Oscars to lose some of their scales, but is this reason for concern?

Let’s see what today’s article can tell us.

Do Oscars Shed Their Scales?

Not on purpose. Unlike snakes, fish don’t need to shed their scales as they grow since their scales will grow with them.

But there are instances where fish will shed their scales as part of their biological setup. The difference is that once the fish has shed its scales, they will never grow back. Take the swordfish, for instance, the sword-nose giant born with scales but loses them along the way.

The adult swordfish doesn’t have any scales because the reason the fish sheds them isn’t the same with snakes shedding their skin.

If you see your Oscar missing some of its scales, you need to investigate the cause fast. Oscars don’t lose their scales naturally; some of the phenomenon’s causes can actually put the fish’s life at risk.

This is probably the number 1 cause for Oscars losing some of their scales throughout their lives. The causes may be multiple, including bullying from other fish, fighting, mating, and even rubbing against various tank decorations and wood.

First, you should assess the damage and understand where it comes from. It may be tricky at first since you will need to monitor your Oscar regularly and assess the tank dynamics if you have another fish present.

Physical damage can also be caused by aggressive tank mates. Although Oscar fish can be kept with other fish, they can only live with fish that are aggressive. Sometimes, the scales of your Oscar fish may peel off due to bullying or bites.

Once you’ve discovered the cause, work towards a reliable solution before the damages become too severe.

Oscars may deal with infections for a variety of reasons, primarily due to physical injuries. Untreated injuries will come with a high risk of infection, resulting in lost scales around the injury site.

You can do several things here, including removing the cause of injury and treating the fish with antibiotics. If you’re unsure what the cause may be, assess the fish’s behavior over several days, especially if you have multiple fish in the same tank.

If the Oscar displays a more severe infection, ask your veterinarian for advice on treating it.

Your Oscar may be dealing with various diseases or parasites that could result in the fish losing its scales. The infectious protrusion is one of these conditions, also known as scale shedding disease. It’s the result of bacteria damaging the fish’s scales and skin and opening the door to infections in the long run.

These problems can be fatal, which means immediate treatment is necessary to prevent them from aggravating. Many of these conditions may also spread to other tank occupants fast.

I suggest speaking to your veterinarian about finding a relevant solution fast. Antibiotic treatment is often enough to counter many of these issues promptly.

Your Oscar will experience a variety of health problems due to unacceptable water conditions. Losing scales will be the least of its issues. Unclean tanks will lead to ammonia buildup, which is deadly in high-enough concentrations

Ammonia poisoning is common in tanks with dirty water and overcrowding. One of the first signs of problems is the fish gasping for air and displaying erratic swimming patterns. Loss of appetite is another, along with losing scales, body sores, and blood-red gills.

To prevent this issue, I recommend monitoring the ammonia levels in the tank water and changing the water weekly. If you notice any signs of ammonia poisoning, quarantine the fish, change the water, and ensure proper treatment according to the vet’s specifications.

Your Oscar fish may lose some scales here and there due to rubbing against tank decorations, driftwood, rocks, plants, etc. This isn’t really an issue unless the damages are extensive.

Sharp rocks and decorations may even hurt your Oscar, causing it to risk infections in the long run.

Watch the fish to see what may be causing its wounds and remove any sharp objects from the tank.

Can Oscar Fish Regrow Its Scales?

The Oscar can regrow its scales, depending on the severity of the damages and the reason why it lost them. But the process may take time, and the newly formed scales may never grow as large as the original ones.

The idea is to prevent the Oscar from losing its scales in the first place. Or, at least, mitigate the damages by assessing the threats and removing them asap.

Scales play vital roles in the fish’s everyday life. Some of their underlying benefits include:

Your Oscar doesn’t lose scales naturally. If you notice that your Oscar is missing scales, try to identify the cause asap. Finding the cause and seeking a reliable solution will allow your Oscar to heal and recover faster.