Are Oscar Fish Good for Beginners?

If you’re looking to start your first aquarium, I would recommend avoiding Oscars as your first fish. This species isn’t really beginner-friendly, so you would be better off settling for something like guppies, requiring less maintenance and care. 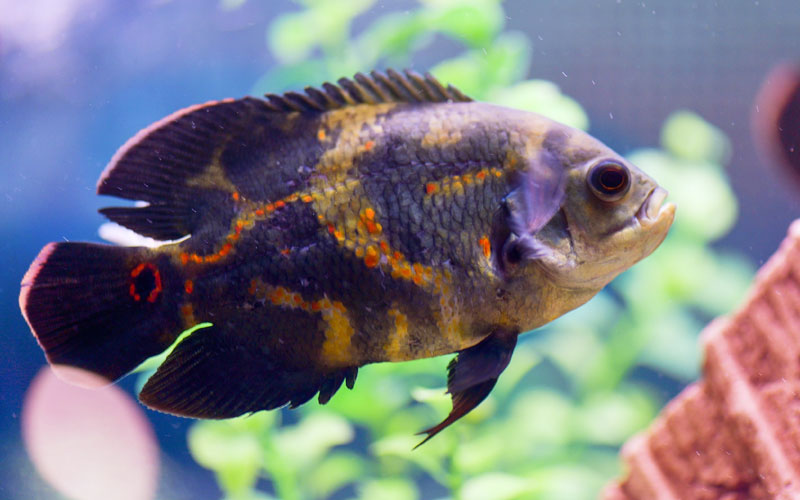 Oscars aren’t extremely picky about their environment either, but they tend to be more sensitive than other species. They have special needs that you may not be able to fulfill as a beginner in the fish-growing business.

In this article will discuss these needs to show why the Oscar fish is more fitting for medium to advanced fish keepers.

5 Reasons Why You Should Not Get an Oscar Fish

There are probably many other reasons why Oscars aren’t ideal for beginners, but today we’ll focus on the most important 5.

Oscars are some of the fastest-growing tank fish you can get. They can grow up to 1 inch per month constantly until reaching adulthood. This is rather atypical for the fish world since most fish’s growth rate will decrease as they mature.

This means that your situation will change fast, with Oscars requiring more space, more food, and a different level of care as they grow. This accelerated growth rate will often confuse novice fish keepers who don’t have the knowledge or presence of mind to adapt to the changes.

The typical Oscar fish will grow up to 10 to 12 inches. It’s not uncommon, however, to see them reaching 14 inches or even slightly more. Their impressive size comes with matching space requirements as the average Oscar needs at least 55 gallons of water.

This can make for quite the investment and shows why Oscars aren’t really the smartest choice for novice fish keepers looking to save money.

Then there’s another aspect that makes growing Oscars even more of a challenge than you might suspect. Oscars can live alone in the tank, but most fish experts recommend having at least 2, preferably 5, in the same environment. This will keep the fish healthy, active, and stable in the long run, which is essential seeing how Oscars can live up to 20 years.

With one Oscar needing 55 gallons of water and you needing to have between 2 to 5 in the same habitat, the math doesn’t look good.

– Oscars Produce a Lot of Waste

Oscar’s pooping habits can cause several issues along the way. Unfortunately, Oscars produce more waste than a decent guppy population put together, calling for more frequent water changes. If you think you can skip some of these sessions, think again.

Oscars are somewhat sensitive to fluctuating water parameters, and they don’t cope too well with increased ammonia and nitrites. Dirty water conditions will dramatically affect your Oscar’s health, leading to stress, loss of color, poor appetite, and an overall degrading state of mind.

It’s important to note that Oscars are highly intelligent fish, among the smartest in the fish world. They need entertainment to remain mentally and physically active, and their habitat will influence their behavior greatly.

Performing water changes can be a chore for novice fish keepers who typically want the pros of a fish tank but without the cons. And the cons involve providing regular water changes, cleaning the tank, monitoring water parameters, checking the tank dynamics to prevent bullying and health problems, etc.

The situation is even worse if your Oscar lives in a smaller environment, as you will need to clean their tank even more frequently.

If you lack the time to do so, I suggest avoiding Oscars, to begin with. Otherwise, you will make the fish feel miserable, shortening its lifespan and subjecting it to unnecessary suffering.

Oscars are among the most aggressive tank fish species. The problem isn’t necessarily their aggressive behavior but rather the triggering factors, precisely because there are so many of them.

Oscars can get aggressive for a variety of reasons, including:

Oscars are mostly carnivores but may nibble on some plants occasionally as well. They need a diverse and rich diet to remain healthy, energetic, and, most importantly, calm. Lacking a proper diet may cause them to seek for nutrients in other places, which often includes other fish.

Oscars will only kill and eat fish that are way smaller than them. The rest are luckier in the sense that they will only get bullied and attacked occasionally.

Oscars need special treatment compared to other fish species. If you’ve never had a fish tank before, I recommend avoiding Oscars for the time being. Get a medium-sized guppy tank, practice on them, and then change to Oscars if you feel prepared.

Just make sure you read my Oscar caring guide to learn how to provide your Oscars with long, healthy, and happy lives.