The midas cichlid (Amphilophus citrinellus) is a very interesting and eye-catching fish species that every cichlid lover should know about. 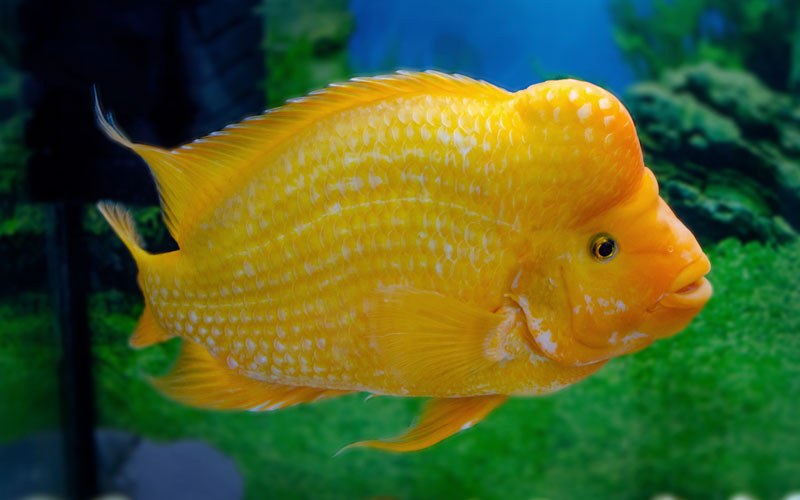 The appearance of a midas cichlid can range anywhere from having a dark brown body with gray to blackish stripes, or a combination of orange and white patterns on their body. Also, they are known for having a bulge on their forehead.

However, this color pattern seems to disappear as soon as they are introduced to an aquarium. In such settings, these fish seem to turn white and orange.

Rarely, the fish will also morph into a yellow-ish morph variation, although that doesn’t happen very often.

You can expect to see a wide variety of colors on these fish, though. Ever since they have been kept and bred in captivity, their colors seem to be constantly changing.

These fish are known for being relatively easy to keep and take care of. However, there are some requirements that they need in order to stay peaceful at all times.

The biggest concern for new owners of midas cichlid is that they don’t give them enough space in their tank. You should know that these fish will require quite a lot of space in their aquarium, or they can easily turn aggressive towards other fish in closed captivity.

In this article, we’ll talk about everything there is to know about the midas cichlid – how you can keep it, how to feed it, what are the water parameters, and how to breed it.

The midas cichlid, or Amphilophus citrinellus, was first described by Gunther in 1864. That’s when the fish species was first located in their natural habitat and recognized as a species.

They were first found in Central America near the Atlantic slope. This includes the lakes of countries such as Costa Rica, Nicaragua.

Lake Apoyo, Masaya, and Nicaragua and Manaua seem to be their primary living habitats where they are found. However, they have been successfully kept and bred in captivity, too.

Very rarely, we will find these fish in slow-moving rivers, but they seem to prefer more stationary waters to active and fast-moving rivers.

However, it was not until the late 1980s when these fish were really recognized as their own species.

Before that, they were placed under the common genus of Cichlasoma; but that genus became so wide that there became a need to clearly identify individual cichlid species, and the midas cichlid was one of them.

As we’ve already said, these fish prefer to live in slow-moving waters, preferably at depths of between 3-114 feet (1-35 m).

They like rocky areas with plenty of roots around them where they will normally feed on small insects, snails, worms, and other creatures found in those areas.

Knowing their natural habitat can help you to understand the fish better and know what sort of conditions it prefers or even requires.

Before we jump into this category, we must mention that this fish will normally grow to about 14” in size. So you will have to adjust the tank size accordingly.

As we’ve already said, these fish will require a lot of space to live in. They are used to relatively open areas with little obstacles in the way.

For a single female fish of this species, you will have to provide a tank of at least 55 gallons. For keeping one single male, you will need much more – at least 75 gallons.

If you’re looking to keep a pair of these fish, then you can expect to have a tank of at least 125 gallons. However, that number can go up if you plan on keeping other fish with your midas cichlid.

Most likely, you will require to buy a heater for your tank since these fish will require relatively high temperatures in their tank.

Another factor to keep in mind is to have strong filtration in place with adjustable flow rate. They can produce quite a lot of waste, and if you’re intending to have plants in the tank, then filtration will need to be especially powerful.

But make sure that these fixtures are firmly placed within the tank, as these fish are notorious for trying to break these things.

Fine sand should be the substrate. Provide them with plenty of hiding spaces like rocks and wood. If you intend to have plants, make sure they are well rooted to prevent them from being excavated by the fish.

Now that we’ve learned about the tank conditions for these fish, you’ll also want to know what sort of water parameters they prefer.

The temperature is the key factor when it comes to water parameters. These fish prefer tropical temperatures of between 72 and 82 degrees Fahrenheit (22-28 degrees Celsius).

We’ve already mentioned that you might need a heater for achieving these temperatures, especially if you live in areas where the air is relatively cold.

In terms of the PH levels, try to keep them between 6.6 and 7.3. A neutral PH seems to work best with these fish. The hardness of the water should range between 10-20DGH.

It shouldn’t be too hard for you to keep the water parameters at these levels, but you will want to include a powerful filtration system, which can help you prevent ammonia from growing and forming, as well as algae.

Change your water constantly, too – every week or every fortnight at the very least.

Midas cichlids are omnivores, although they do prefer a primarily carnivore diet. The best way to feed them is to keep a good balance of nutrients throughout their meals, and not rely on one type of food too much.

Flakes and pellets of high quality can be the center of their diet. But make sure you buy the right pellets with healthy nutrients and as many nutrients as possible – proteins especially. Cichlid pellets should be considered for these fish.

You will do well to complement the pellets with other types of food – live foods especially, as well as frozen foods. Consider the following foods to feed these fish:

You can also consider using supplements every once in a while to make sure these fish get enough nutrients in their daily diet.

In any case, don’t overfeed these fish. Keep the meals small and moderate, and refrain from feeding them too much food at once. If you’re unable to fit this schedule, consider an automatic feeder or feeding them twice a day.

Midas cichlids are relatively peaceful fish, so you won’t have many problems with keeping them with other fish as long as they have enough space in the tank.

In small tanks, this fish will become aggressive and territorial towards other fish, especially towards other smaller fish in the tank.

However, provided with enough space, this fish can become a peaceful fish that will happily coexist with other South and Central American cichlid species.

And for more security, you can consider keeping this fish with other similar fish that have a relatively similar temperament.

The best way to keep more fish in the same tank is to keep this fish species with fish of the same species.

Midas cichlids have been bred successfully in captivity. If you want to breed these fish, you will need a cave where the fish will spawn their eggs. The caves can be made from rock formations, or flowerpots.

The fish will start to swim around each other and will slap each other with the tails on their bodies when they are ready to reproduce.

The breeding will be done in such a way that the female will swim in front of the male and rub their side against their nuchal hump. This ritual can keep boing for 2 weeks to 6 months.

Then, when the female starts to spawn eggs, the male can become aggressive towards the female. That’s when you need to put the female into a separate tank.

The most important thing during breeding is to keep a close eye on the female and protect her from possible male attacks.

They are fairly easy to keep, and it is recommended that intermediate fish tank owners keep this fish.