Lake Victoria is home to a wide variety of animal species. It’s the world’s largest tropical lake, where you will find more than 500 different cichlid fish species. The amount of variety when it comes to colors and color patterns is just dizzying. 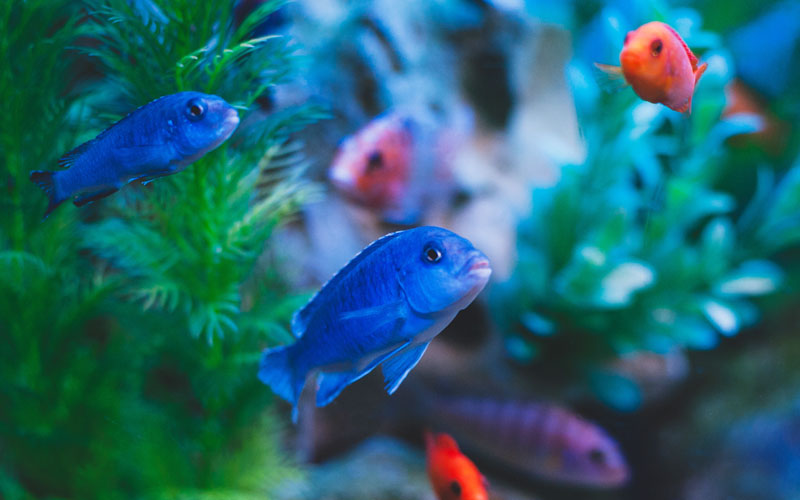 For 15.000 years, these species have developed and became something that many aquarium owners adore. Many of the cichlids have been there from the start, but most of the cichlids stem from those ancient species. This lead to an incredible variety of hybrids that stun anyone who sees these fish. Lake Victoria is full of cichlids that will catch anyone’s attention.

The variety of these fish is incredible. Not two fish species are the same, whether it’s their behavior, their looks, and their character. Some like to nibble on the plants, as they prefer vegetable-based foods. Others like to consume invertebrates and worms, making them carnivorous animals. Some are hybrids and will consume anything you throw at them.

However, the biggest and most impressive factor these fish differ in are the colors. These are just so diverse and stunningly beautiful. For those who are interested in Lake Victoria cichlids, I’ve compiled an extensive list of the 10 most popular cichlids from Lake Victoria.

Endemic cichlids, or Lake Victoria cichlids, are perhaps the most common type of cichlid fish in Lake Victoria. These fish can range anywhere from 1.98” to 3” in size. They care their name after Julius Nyerere, who was the president of Tanzania from 1961 to 1985.

And these fish can also vary significantly in colors. As they are mostly bottom-dwellers, you will struggle to find them with your naked eye in the lake. However, they have already been exported to the west, and are commonly a part of an aquarium and home aquariums.

These fish will display a wide range of colors, from red, orange, blue, yellow, to black and even pink. These fish are very varied, as no two fish are really the same. And they are an incredibly popular fish for home tank owners, and one fish that every cichlid lover should know.

This is another Lake Victoria cichlid species that is endemic to Lake Victoria. Again, this fish is named after Juliuj Nyerere. However, this fish varies slightly from the fish above, especially in size. These tend to be slightly larger.

In terms of colors, they are just as colorful, making them a popular choice among home tank owners. They are marked as least concern when it comes to how threatened they are as a species. As you will likely find them in many aquariums all around the world, there is no surprise behind the popularity of these fish.

The distinctive feature of these fish are the yellow stripes across the body of the fish, and the orange-gray body. Often, there are also other colors mixed in, such as red, blue, and black. It’s a colorful fish that is certainly incredibly popular.

Enterochromis Paropius is a very rare Lake Victoria species that are almost extinct, sadly. You won’t find it that commonly in the lake, although you will likely find it in some other parts of Africa. You are most likely to find it in river Nile, but it gained its popularity throughout the years as a Lake Victoria cichlid.

These fish are slightly smaller in size – they will reach a size of 3” at most, however, they sometimes will not reach that size. This is a fish that likes to feed on algae and other types of vegetable matter they tend to find in the lake. You’re very likely to find these fish in groups, as they are branded as a group fish.

It is a peaceful fish, which makes it a must that you pair it with other peaceful fish. It’s still a favorite choice of home tank owners, and for good reasons. They are incredibly beautiful, with interesting colors that vary from yellow, green, black, and red.

The zebra cichlid, as it’s often called, earned its name by the black stripes on a white-yellowy body. These fish are incredibly attractive fish that are sure to spice up any tank out there. They look fantastic, and they will bring glow to your tank if you decide to own these.

They will grow to about 5” in size. They are commonly found in Lake Victoria, but you will also find them in other parts of Africa, namely Uganda. These fish are relatively easy to keep care of, but you’ll need to make sure they get enough space for themselves. They are active swimmers, and they are likely to be aggressive at times.

They are branded as a semi-aggressive fish species. If they get enough space to live in, they are unlikely to get aggressive. Just provide them with enough space and you will see its best colors.

The broken bar cichlid is easily recognized by the large, black vertical line on their body. They are also known by the lively color hues that range from yellow, orange, black, blue, and white. The possibilities are endless with these fish, as their colors are so diverse.

But owning this fish is fairly simple. Luckily, unlike most cichlids, these fish are quite peaceful. This means you’ll be able to own them without worrying about other fish and whether they will attack them. Although they might be likely to nip at other fish’s fins, especially the slower-moving fish.

Overall, these fish are quite small. They might be able to fit a 20-gallon tank, although it’s not recommended to fit one in such a small tank. That’s because of their lively behavior and their active nature. They want to move around freely, and for that, you’ll need to provide enough space for the fish.

Blue Rockpicker cichlids are, well, blue. They have a mostly blue body and they are not that big overall. Up to 3” in size, they will be able to fit most small to moderately sized aquariums, and they are a very popular choice for home aquariums, too. And that’s a testament to their looks, but also to their fairly peaceful nature.

They can get aggressive at times, especially when they are breeding. So you will have to be extra careful when you are breeding these fish, if you opt to own them, of course. But overall, you shouldn’t have any problems with keeping these fish happy and content in your tank.

They are tropical fish that we will commonly find in Lake Victoria, although they are also commonly found in other areas in Africa. They will adapt to a variety of different tank setups and conditions, but you should always try and provide them a tropical environment.

Ruby green cichlids are truly some of the most beautiful cichlids out there. As they are very popular for home tank owners, you may have already seen one of these around. However, they are also spotted in the wild in Lake Victoria and some other areas in Africa. Most commonly, they are found in Uganda and Lake Kyoga.

These fish are characterized by an amazing array of colors on their bodies. You’ll be amazed by the colors portrayed by these fish. These will vary from green to red, as they fuse together somewhere in the middle of their body. And these fish are also not very large, so they will be suitable for those who opt for slightly smaller tanks.

They prefer a sandy substrate where they like to dig into the substrate quite a lot. They will actively scrape algae from rocks and other parts of your aquarium, as they prefer to eat algae and other different types of food that are plant-based.

The velvet black cichlid is truly something different – they are completely black, and they appear as they are made of velvet. They will add a touch of class, elegance, and even mystery to your tank. These fish are really unique, and they have a huge appeal among home tank owners. And you can see why when you see it live.

Something that might be problematic about this fish is that they might turn aggressive towards other fish in the tank. That’s why they require tanks that are quite large (from 40 gallons upwards), which will help you accommodate these fish easier. They need plenty of space if you don’t want them to turn territorial towards other fish. But if you keep good care of them, and provide them enough space, you should not see that behavior.

But it is their appearance that makes them so appealing. With their black body and the orange colors on the tail, these fish represent something that’s very unique in the fish world. And if you want to combine them with more colorful fish, you can do that, but there are some things to keep in mind.

The Pundamilia fish is one of the most common fish you will find in Lake Victoria. These fish have a zebra pattern across their bodies, creating an interesting and quite unique appearance in the tank. Their striped appearance is a joy to behold, and it’s what makes this fish so popular. And if you’re looking for a diverse fish, then you can’t go wrong.

Just because these fish have a zebra pattern on their bodies doesn’t mean you’ll only find them in two colors. They are available in a wide variety of colors, in truth. Yes, white and black (and gray) are the primary colors, but you’ll often see different combinations and variations. Orange and blue are often present, as are other colors.

However, you’ll need to be mindful of their behavior. They can get aggressive towards other fish, which is not great news, and it limits the amount of choices you have in terms of tank mates. But with some good care and proper tank setup, you can easily add them to your fish collection.

Last but not least, we have the Christmas Fulu fish. This fish is perhaps the most unique and most appealing in terms of appearance out of all of the Lake Victoria fish I’ve discussed here. However, the problem is that these fish are very rare – almost extinct! As they are so beautiful, they have been actively hunted down, and now they are endangered.

And couple that with an unfortunate natural prognostic and their development, they find themselves on the endangered list of species. In Lake Victoria, they are considered extinct, but you can still find them in some other African lakes. Still, they are still found in some captive breeding setups where they are part of a breeding chain. And they should be bred when they are found in the wild.

These fish are primarily vegetarian, so you’ll need to feed them a variety of veggies. In the wild, they prefer to eat foods such as algae, but they are likely to accept a wide variety of vegetables, too. As they are tropical fish, they prefer higher temperatures, and they also prefer slightly larger tanks. Such a shame that they are almost extinct in the wild.

Lake Victoria is home to some of the most interesting and unique fish species. Cichlids are very common in that lake, and you’ll find a wide variety of cichlids there. However, some fish are very rare and should be preserved, which is why you should keep an eye out and get awareness of these fish.

But above all, these fish are incredibly beautiful. Some are multi-colored, while others have only one color on their body. But they still manage to amaze us with their looks, and you’ll even be able to own some of the in your own tank.