There are about 250 fascinating species that inhabit Lake Tanganyika. Since it would take an eternity to cover all the different species in one article, we are only going to talk about 10. This list is about the most popular cichlids that fish enthusiasts like to keep at home. 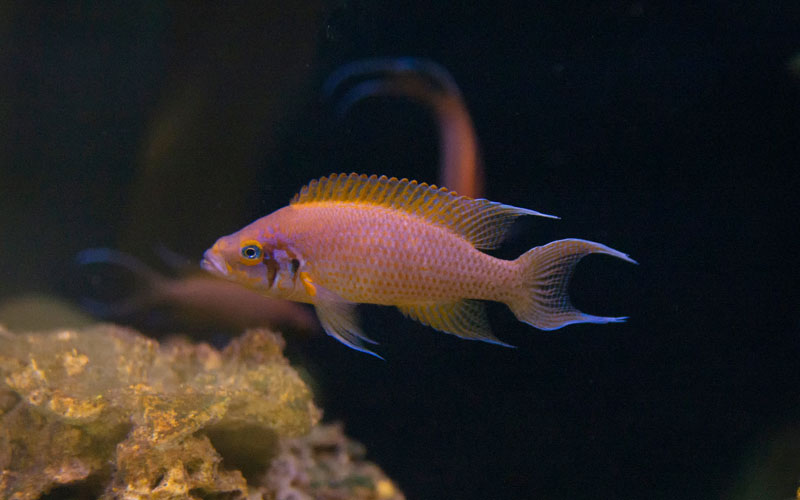 Them being so popular also means that they are not that difficult to take care of while being very decorative. Not to mention that all of these cichlids have amazing personalities that will keep you entertained for years. One downside is that they are rather aggressive but if you know how to handle this, it is not going to be such a big issue.

If you want to keep more than one Lake Tanganyika Cichlid at home, you will definitely need to buy a big tank. They are territorial and it’s important to give them the space they want. The good thing about them is that they have the same requirements when it comes to water conditions and tank setup. This allows you to set up a quite diverse cichlid aquarium at home.

The Frontosa Cichlid is going to be your favorite zebra-looking fish. With its big mouth, the hump on its forehead and its vertical stripes, it is quite a unique fish to keep in a community aquarium. It is also quite big, reaching 12 inches in size when matured.

It lives quite long too compared to its size, reaching 15 years of age if you take good care of it. The Frontosa will require a lot of space to be able to swim around gracefully in the aquarium. A 75-gallon tank is the bare minimum tank size that allows him to live comfortably.

Although most Lake Tanganyika fish are aggressive, this one is more on the peaceful side. Feel free to keep them in the same tank with other Frontosa fish or species that are from the African Rift Valley. The difference between the males and females is that the males have a slightly bigger hump on their head.

Truly fascinating black patterns cover the body of the Masked Julie Cichlid, which makes it an attractive inhabitant for any home aquarium. Another thing that its interesting about this species is that it is not aggressive nor predatory at all unlike many other species from the same lake.

This makes them ideal for populated and colorful community aquariums. They get somewhat territorial during breeding season but that is something to be expected from most fish. The Masked Julie Cichlid is one of the smaller ones with the 3 inches of a full-grown individual.

People who want to breed them usually buy a lot of them because it’s hard to tell apart the males from the females. Then, when they notice that a pair has formed for breeding, they just remove the rest of them to a separate tank. Its long and slender body will make it truly stand out among the other fish you keep in the tank.

As you might guess, the Brown Julie is quite similar to the Masked Julie. The only difference is that the dominating color here is brown in addition to the black pattern. You can easily tell them apart because the Brown Julie adult grows up to 4 and a half inches while the other one only up to 3 inches.

This still doesn’t mean you have to get a big tank for them. A 20-gallon one is more than enough for a pair of this species. The huge dorsal fin of the Brown Julie is what makes it a truly fascinating addition to a home aquarium.

You are not going to have any difficulties with this fish as long as you keep the water clean. All you need to do is to change small amounts of water every week and they are going to be fine. It is a great choice for beginners since the Brown Julie is probably the hardiest one among all the Lake Tanganyika Cichlids.

The White Spotted Cichlid looks like something completely out of this world. If you are looking for an unusual fish to add to your aquarium, we can only recommend this one. Its body is basically covered with white dots on a black or dark blue background including its face and fins.

However, this appearance only lasts while they are young. By owning this fish, you are going to be able to witness the whole transformation. As the White Spotted Cichlid approaches adulthood, it slowly becomes a completely different fish. This is definitely something you can rarely see in an aquarium.

As they mature, their head slowly turns into blue while the rest of their body turns into black and a bright yellow vertical stripe will develop in the middle. There are slight differences in the appearance of the adult White Spotted Cichlid depending on where they lived in Lake Tanganyika.

We recommend to keep this one in a single species tank of about 10 individuals because of its aggressive temperament.

Viewed from the side, the Calvus Cichlid might look similar to a lot of other cichlids. If you take a look at it from a different angle, however, you will discover that its body is laterally compressed to an unusual degree. Besides that, it has some wonderful fins and its body is covered with dots and stripes as well.

The stripes are all black, while background is silver or white. Since the Calvus Cichlid is so compressed, it can easily disappear between rocks in its natural habitat. In order to make this species feel safe, you should put plenty of rocks into the aquarium.

Its big mouth allows it to eat various smaller fish, invertebrates and eggs. This is partly why the Calvus likes so much to scavenge between rocks. An interesting fact that you might not notice at first is that this species is bald between the eyes, meaning that it has no scales there.

The narrow stripes on the body of the Zebra Shell Dweller are going to mesmerize you once you see it in your aquarium. There are many varieties available when it comes the shell dwellers but they all share that dense pattern of stripes.

The name of this species is not a coincidence, it indeed hides in snail shells out in the wild. This fish is so small that it can simply use them as shelter. If you compare them to the appearance of such shells, it turns out that the two are quite similar to each other.

The Zebra Shell Dweller is not only going to be aggressive toward other fish but towards you as well. They are most certainly going to bite you at one point, which is kind of cute from such a little pet. Try to put some shells into the aquarium and their behavior is going to entertain you every day.

The Six-Bar Lamprologus is one of the prettiest Lake Tanganyika fish you can get and there are many varieties to choose from. All these varieties can be considered sub-species and they can differ depending on where they live in the lake.

The most popular one has six bold black stripes on its side that start at the upper fin and fade as they reach down its body. The background is usually gold, white or silver. Sometimes its appearance is even spiced up with a shade of blue. Those six stripes are the reason why it’s called Six-Bar.

It is considered a mid-sized fish with its 6 inches. Since this species is rather sensitive to water conditions and contamination, you will need to perform tank maintenance quite regularly. For a medium-sized community tank of 50-gallons, we recommend you to keep only a pair of Six-Bar Lamprologus.

They simply can’t tolerate their own kind because they establish territories. The only solution to this problem is to buy an unreasonably big aquarium for them.

The way the Fourspine Cichlid grows in a community tank is quite unusual. It is actually bigger when kept in an aquarium than when it lives in its natural habitat. If you keep it in your home aquarium, it will grow as big as 7.8 inches while it can reach only about 4.3 inches outside.

In order to take proper care of this fish, you will need to lay down some soft sand. In the wild, they mostly eat snails and other invertebrates. At home, you can feed them literally any meat-based food. As long as it’s protein-rich, they are going to be happy to eat it.

Besides the sandy substrate, make sure to put numerous big rocks and caves in the tank. The Fourspine Cichlid pair is eventually going to use them during the breeding period. That is when they become rather aggressive while guarding their eggs.

Their aggression is not something you should be concerned about because they are peaceful when they are not breeding.

The Lemon Cichlid is a pretty little fish that has an elongated body and the color of a lemon. It is fairly little, being only about 4 inches when full-grown. For those who are looking for small fish with vivid colors, this one should definitely be part of their collection.

What makes this fish special is the fact that plain yellow fish are quite rare in the trade and out in nature in general. This is why the Lemon Cichlid is one of the most popular fish among fish keepers. Not every one of them have the same coloration, as it depends on which parts of Lake Tanganyika they inhabit.

They can flourish in different shades from bright yellow to deep brown. People worked hard to eliminate this dark pigmentation. In the process, it turned out that the Lemon Cichlid can turn red in some cases but that depends a lot on its diet and habitat.

In fact, their scales turn darker if you lay down a dark substrate in your tank. If you want this fish to keep its bright colors, then it’s better to lay down some light-colored sand.

Also referred to as the Fairy Cichlid, the Brichardi Cichlid is one of the most wanted fish from Lake Tanganyika. Both males and females are attractive and they are caring parents as well. What makes this cichlid truly fascinating is its long caudal fin that has the shape of a lyre.

There are many species from the lake that look similar to each other but this one really stands out with its beige color and unusual eye markings. The Brichardi Cichlid is one of the smallest in this family, growing only up to 4 inches in size. Since it doesn’t have any specific requirements, we can recommend it for beginner fish keepers.

You only need to put a low number of plants in your tank and instead focus on placing as many rocks as you can. This cichlid prefers a soft, sandy substrate which properly replicates its natural habitat. Since they are afraid of most other species, it is best to keep them in a single species aquarium if you want them to breed.

So, which ones of these Lake Tanganyika Cichlids would you keep in your aquarium? Once you have it all planned out, prepare the tank for your little pets. All you need to do is to lay down some sand substrate and decorate your fish tank with caves and rocks.

That’s what all these cichlids are going to need on top of ideal water conditions and a quite universal diet. Although the 10 species we talked about here are just the tip of the iceberg when it comes to Lake Tanganyika Cichlids, these are the most popular ones.

Since they are popular, there is a lot more information available about them online. But if you are looking for a bigger challenge, you can choose according to your own taste. All cichlids from the lake have somewhat similar needs and often similar appearance as well. Hopefully, this article was a helpful introduction to the fish that inhabit Lake Tanganyika.