Rainbow kribs (kribensis) are one of the most interesting fish to look at. They are very colorful and attractive, and they are sure to liven up any tank. Among the crowd of unpredictable cichlids when it comes to behavior, kribs represent a steady and reliable choice. 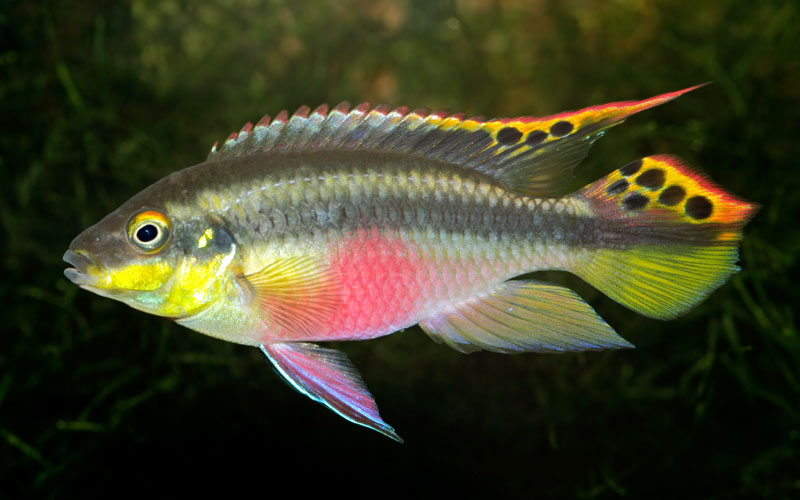 They are not the most aggressive fish, especially if unprovoked. They will only get aggressive when they protect their spawn.

Once you get used to these fish, they are a real gem to keep care for. They’re not too demanding in terms of diet, too, and they are not too big. They will adapt to other fish species, too, so you can happily combine them with other similar fish.

If we consider everything about this fish, we learn that it’s a great option to own. That’s thanks to their peaceful and friendly behavior, their fruity and attractive appearance, full of colors.

And they are easy to care for – as they are omnivores, they don’t represent a tough option to care for. Although you will need to keep a few things in mind – they are tropical fish, so they will require higher temperatures.

In this article, we’ll take a look at everything you need to know about rainbow kribs – how to care for them, and everything else.

Unlike most cichlids, these fish will most commonly be found in Africa, especially in the rivers and streams of the African continent.

To be more precise, these fish are commonly found in the Ethiope river, especially the drainage mouth area of the river. And you’ll also find them in the deltas of the river Niger.

As you can see, these fish prefer moderate to fast rivers with brackish and alkaline conditions. The temperatures are also quite high where they live – there are still tropical areas, so you will want to have a heater in your tank.

This fish was first discovered sometime during the 19th century. However, it was not imported to the West and to Europe until the early 20th century.

In 1913, the kribensis fish was imported to Germany by Christian Bruening. You can imagine that this fish was very valuable when it entered Europe. But, in the subsequent years, this fish spread and became widely available.

Most of the people who saw these fish at the time were impressed by its colors and wowed. They became an instant hit. Keeping them was not easy, as there was simply no equipment yet available. But the natural habitat played, and still plays, an important role of keeping this fish.

Rainbow kribs are relatively small fish. You can easily keep them in a small tank, especially if you opt for a lone krib.

Ideally, you should have at least a 20-gallon tank for a single fish. But as these fish are quite active, it might make sense to have a relatively larger tank. And that’s especially the case if you opt for several fish.

That allows them to hide easily, and also consider adding rocks and plants to the tank. Ensure that the opening has smooth edges and low light conditions, allowing the fish to hide.

Ceramic pots can work very well for this purpose, although make sure they fit your tank and don’t take up too much space.

Bury it in the gravel so it remains stationary at all times. You can opt for live or artificial plants, depending on your preferences and the other fish in the tank.

It’s desirable to have plants in the tank for the kribs. Not only do plants provide oxygen, but they will also look great, and they will add another place for the fish to hide and swim around.

As for the substrate, make sure you use dark-colored gravel, although other types of gravel will work well, too.

Rainbow kribs are tropical fish, and you’ll have to adjust the tank conditions accordingly. This obviously means higher temperatures, neutral hardness, and freshwater, but what exactly will you have to be mindful of?

The crucial thing is that you’ll have to be mindful of the temperature of the water at all times. As these fish are tropical fish, they will require slightly higher temperatures – between 75-76 °F (24-26 °C) are the ideal temperatures.

Although there is some wiggle room for the temperatures, but you will want to keep them at those ranges at all times.

This will take constant measurements and constant care for the water. And, you might need to purchase a heater to reach those temperatures.

As your room temperatures is quite lower than that, you will need to find a way to heat it up. And a good, powerful heater will serve you well here. and measure the temperatures constantly, too.

When it comes to acidity, it should be around the neutral levels (7), but it should be slightly lower than that, ideally (at 6.5).

This is relatively easy to maintain, but again, it will take constant measurements and care. Measure the acidity once a week for the best possible results.

The hardness should be between 8-12DGH. In general, these fish are quite hardy fish, but you should, nevertheless, try and keep the water conditions in these ranges.

Caring for the fish is relatively easy, though. Small differences from these ranges won’t matter that much, but it’s still preferable that you keep the conditions in the ideal ranges.

Kribensis fish are omnivores. That means that they will eat almost all types of food, both meaty and plant-based foods.

You can probably get away with feeding them pellets and flakes primarily, which can be both meat-based and plant-based. But these foods should be high-quality and full of nutrients already.

However, these foods should by no means be the only source of food for the kribensis. You will want to make sure the fish get a good variety of foods, including live foods, frozen foods, vegetables, and other treats or supplements.

As for the live foods, bloodworms, brine shrimp, daphnia, mosquito larvae, and other similar foods seem to work best.

As they are bottom dwellers, you might want to make sure you buy them pellets and foods that sink towards the bottom. This will make sure that the foods don’t stay at the surface and never reach the fish.

As for the vegetables, you can always include some sliced vegetables into the diet. These foods will provide them with minerals and vitamins that are crucial for keeping them healthy.

You can, for example, feed them sliced zucchini or other similar types of food.

Kribensis fish are relatively peaceful and won’t stress or threaten other fish. That’s great news for anyone who’s looking to add to their community tank of fish.

These fish will fit right in, although you might want to provide them with a partner. Make sure you don’t place them to slow-moving fish, as they are likely to nip at their fins. That’s the only thing to keep in mind.

Other than that, make sure that you don’t only place them next to bottom-dwelling fish. As they mostly move near the bottom, that could be a problem.

But, if you keep them with other types of fish, such as angelfish, ram cichlids or discus fish, that will be even better.

Anything goes, really – you should be able to keep them well with other fish species that are not aggressive and have a similar attitude to these fish. Also, make sure they are of a similar size, and also that they are not slow-moving fish.

Don’t house Kribs with Oscar fish or other aggressive fish such as firemouth cichlids or convict cichlids.

Kribensis fish are pretty easy to mate and breed. You can select your preferred mating pair, or you can simply place a male and a female into the tank.

Select young, healthy fish for breeding. These fish will reach maturity at the age of 6 months, and will actively start seeking mates.

Ideally, you should have a separate breeding tank. That’s because these fish can get relatively aggressive towards other fish when they are breeding and protecting their spawn and eggs. Especially males will actively fight to protect their spawn.

Slightly higher temperatures should be provided for the breeding tank, and neutral acidity. They will start to form nests when they breed.

After they breed, the female will lay about 300 eggs, and preferably that will be somewhere in the cave. So make sure you have a cave for the breeding tank ready, which will act as a nest.

Then, the male will try to protect the cave and fight other fish. Make sure there are no other fish in the tank when you breed them.

Rainbow kribs are one of the most popular fish species, and for good reasons. They are attractive, colorful, and peaceful towards other fish.

You’ll be able to keep them easily with other fish that are peaceful.

Caring for them is also not that complicated. Luckily, you now know how to care for these fish and everything there is to know about them.