If your plan was to keep a Discus alone in a smaller tank, then we have to disappoint you. This species simply can’t thrive alone because of the stress it comes with. It is the type of fish that loves to spend time around fish of its own kind, which makes it perfect for a community tank. 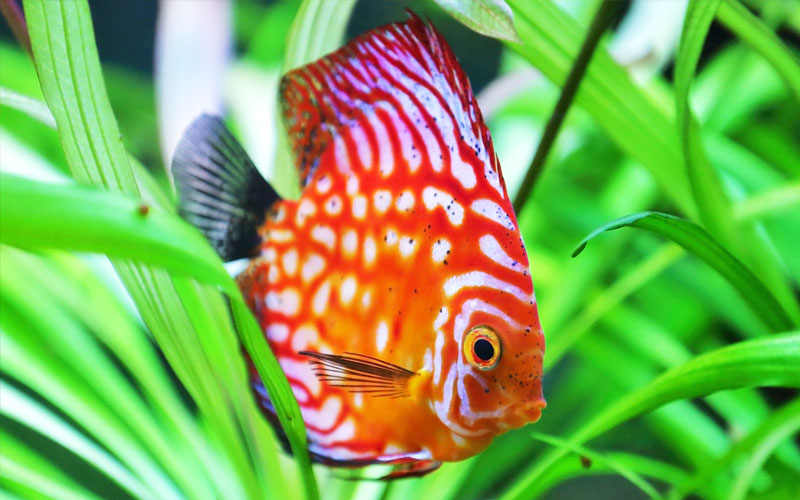 They are schooling fish that only feel safe if their buddies are around them. Otherwise, life is just too dangerous and stressful, which can make them sick. There are hundreds of different fish species that people like to keep at home.

Each species is unique in some sense, which is why you need to do some research before getting one. After all, who would have thought that keeping a Discus fish alone is a bad idea? In this article, we are going to explain why in great detail.

How Many Discus Fish Should You Keep?

For Discus fish, it is ideal to keep them in a school of at least 6 individuals. They feel completely comfortable living in such a group. If you want to keep as many as 10 of them, it is also fine. Just make sure there are a few of them instead of keeping this species alone.

In a community tank, it is especially important to keep a larger group of Discus. With that much stimulation around them that they get from other species, they need to feel safe. Feeling threatened all the time is rather stressful for them and unhealthy.

The bright side of it is that keeping more Discus in the tank also means that you have a more beautiful aquarium to show. These are amazing fish that flourish in their colors. Such an eye-catchy tank is going to be a delight to watch.

Can a Discus Fish Die if Kept Alone?

Stress can cause a lot of bad things for every fish. Most of the fish diseases are caused by stress. Since the Discus is a schooling fish, it is a big mistake to keep only one in the tank. The main reason why schooling fish got accustomed to their lifestyle is because it makes them feel safe.

There are lots of threats lurking around them in their natural habitat and they defend themselves by moving together in groups. If you leave a Discus alone, you put an incredible amount of stress on him. This will eventually weaken his immune system and your little pet will get sick.

Some diseases can be so serious that if you don’t treat them in time, your fish is going to die. This is how being alone can be fatal for them.

Can You Keep Only Two Discus Fish?

Keeping another Discus fish in the tank instead of only one is definitely more than nothing. This is especially true if the other one is of the opposite sex. You either need to find an optimal pair to keep together or just go to the pet shop and buy an already established pair.

A Discus pair can spend a wonderful time together. It is relatively easy to breed them, which also means they are going to have some extra company. Once they raise their fry, you can either separate them or let them grow with their parents.

However, you will certainly need to get a bigger tank at one point. If the tank is too small, then it is eventually become another stressor that will ruin the well-being of your precious pets. Not to mention that they are going to generate a lot more waste if they grow in numbers.

Can You Keep a Single Discus Fish in a Community Tank?

Discus fish don’t like to be alone, yet they don’t like to be around other species alone either. If you want to keep them in a community tank, make sure that you buy at least 5-6 Discus fish. This allows them to swim together feeling secure instead of being stressed out because of the presence of other fish.

For a single Discus, it is just as devastating to be with other species alone as to be completely alone in the tank. They need to be around their own species in order to thrive. Otherwise, they are quickly going to get sick and die, all due to their loneliness.

If kept in a school, however, they are not going to have any issue with living with other fish whatsoever. What matters the most for them is to not feel threatened.

What is the Minimum Tank Size for 6 Discus Fish?

A 50-gallon tank is the bare minimum size you should get if you want to keep 6 Discus fish in the aquarium. We can say that they can live comfortably in it, yet it’s still better to buy a 75-gallon one if you can afford it. Keep in mind that a smaller tank requires more frequent water changes.

In a bigger one, on the other hand, the water doesn’t get contaminated so quickly. It is also easier to consistently maintain water parameters in a bigger aquarium. When it comes to Discus fish, this is especially important because we are talking about one of the most sensitive fish.

If you are looking for a fish to keep alone in your home aquarium, then the Discus is definitely not the right choice. They are schooling fish who need to spend time together, otherwise they get sick very quickly. For those who are amazed by this species, the only option is to buy a school of 5-6 individuals.

Watching them as they carefreely swim together in the tank is going to be priceless. You will also find it easier to maintain the ideal water parameters in a bigger tank. Discus are even compatible with other species, yet you shouldn’t keep only one of them among the others.

The only way they can feel safe is if they are around their own species, otherwise life is just too stressful for them.