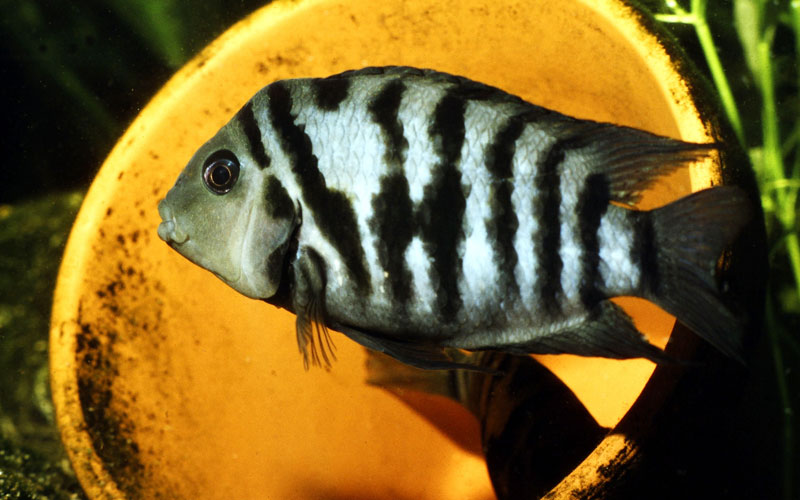 We can tell you right away that Convicts are not able to change their gender. So no, your fish definitely wasn’t going through a sex change. This species can be a bit confusing because females can sometimes act like males and change their coloration next to the fertile male to act like they are going through a breeding period.

Convicts do this to defend themselves from other fish species, although they can fool each other with it as well. In the presence of a dominant male, another male can act like a female as well. What makes this whole game of theirs so confusing is the fact that they can quickly change their coloration.

Male vs Female Convict Cichlid – How to Tell the Difference?

Another thing that differentiates females from males is that they have yellow or red spots on their bellies once they are mature enough to breed. The black strips of the Convict female are more prominent, while those of the male are a bit dimmer.

When Can You Sex Convict Cichlids?

It takes approximately 7 months for the Convict cichlid to be ready for breeding from the day of their birth. At that point, the only preparation you need to make is to get a big enough tank and place some plants, rocks and caves where they can lay eggs.

For a single pair, a 50-gallon tank is going to be enough. It is best to get a pair of Convicts and let them grow together and get used to each other. They don’t have a particular season that they prefer for breeding so they are going to breed throughout the year whenever they can.

The female is going to choose a cave or rock to lay eggs on when the time comes. If you want to encourage them to breed, then just increase the water temperature to 84 degrees Fahrenheit.

If there is no male present in the tank, the female Convict cichlid is going to lay down her eggs anyways. She is also going to protect them as if the breeding has really happened. However, she is completely infertile without the male so the fry are not going to hatch.

Eggs need to be fertilized by a male Convict cichlid after they are laid down by the female. When the female is ready, she is going to lay eggs by herself regardless if there is a male around them. Those eggs are going to decay a couple days after.

They are going to change their color a bit, turning white and that is when the Convict female is going to eat them.

The only rule of thumb to follow when setting up a community aquarium is to not keep a male and a female Convict cichlid together in it. They can get aggressive if you keep them together. Also, the more Convicts you keep in the tank, the worse the aggression is going to be, but fortunately, you can keep convicts together with other cichlids.

It is better to keep a single Convict in the tank and it can either be a male or a female. If you prefer fins that are more prominent, then pick the male because its fins and body overall are larger. Females, on the other hand, have more decorative black stripes but they are smaller.

We can conclude that Convict cichlids can’t change their gender. All they can do is to act like the other gender in certain situations. One of these situations is when the presence of a dominant male causes the other males to act feminine. It can also happen that the female acts like a male when the other female lays down her eggs.

This is all so deceiving that they even deceive each other. However, the main goal of it is to make other fish species think that they are actually mating as a defense mechanism. If you keep a female Convict alone, on the other hand, then she is going to lay eggs whenever she is ready even if there is no male around.

Convict cichlids have very interesting habits besides being very decorative aquarium pets. They might act suspicious sometimes but don’t let them deceive you into thinking that they actually changed their gender.